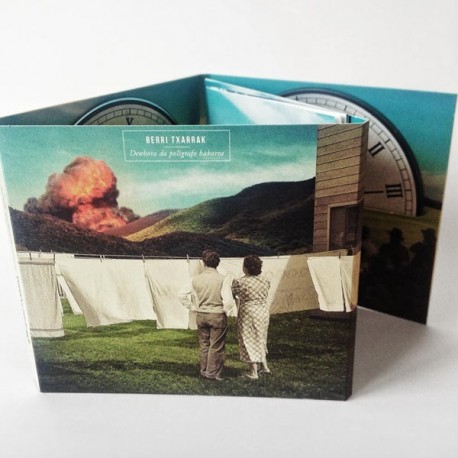 This product is no longer in stock

I- SUTXAKURRAK
After the positive vibe during the recording sessions of the last album ‘Haria’ (2011), we decided to take the BTX-Ross Robinson artistic partnership to the next level. This legendary producer (At The Drive-In, Slipknot, The Cure, Sepultura…) looks for the purest emotional and spiritual aspect of music and he’ll use all his experience to get that extremely thrilling take you didn’t even know you were able to perform.

II- HELDULEKU GUZTIAK
We decided to write a bunch of special songs for the 2nd EP of this tour de force, leaving all our fears and prejudices behind, style-wise. We hired Barcelona-based indie producer Ricky Falkner (Standstill, Lori Meyers, Love of Lesbian…) for this mission. We were sure that he’d be able to face these songs with a different approach. Darkish lyrics for a pop-inspired EP.

III- XAKE-MATE KULTURAL BAT
Bill Stevenson is definitely one of the names you’d think of when it comes to understanding punk rock’s history. As a musician he plays/has played the drums for Black Flag, Descendents, All, Only Crime and even The Lemonheads. In the studio, he’s undoubtedly become one of the most important producers of American punk rock biggest acts: Rise Against, NoFX… always side by side with engineer Jason Livermore.

This EP is full of short, direct songs: two-minute sonic bullets, recorded and mixed old school style at The Blasting Room in just one week (all the band playing together in the main room of the studio).